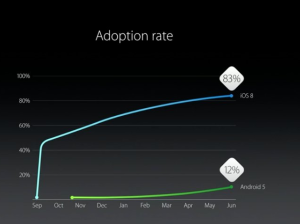 Every year we get new operating system for both iOS (from Apple) and Android (from Google / Android) with some additional updates as sub-version to fix any issues. iOS 9 is due this falls, iOS 8 has already been adopted by iOS devices over 85% since it’s launch last year. Similarly Google had launched Android Lollipop last November and it’s adoption rate is still below 20%.

Globally Android system is used more than 80% but when it comes to being up to date iOS takes huge step forward. Let’s see advantages of having latest operating system on your mobile before going into why iOS is adopted so quickly and why Android takes years to be current on all devices.

So why iOS adoption is staggering over 85% and Android below 20%?

Sky is the limit! Love adventure, learning new things and transform the ideas. View all posts by Pandurang Yachwad